.Producing music is one of the most creative jobs. And the person involved in it has to be a creative and innovative worker. This is because music is more than just a production, it’s an art. It takes lots of blood, sweat, and tears to practice playing your instrument. Or write out your song lyrics or produce a super knockout mix.

Some people might wonder how they can deal with the ear fatigue that comes from being in the studio for hours on end while producing their own music. Although it’s difficult to find a solution that works for everyone. There are some methods you can use to help keep you focused during the process of creating your masterpiece.

One of the best ways to deal with ear fatigue while producing music is to find a way to listen to your music at least twice in order to improve your quality. This means listening to your tracks several times (at the minimum) before you release them. This will allow you the time required to do anything else after creating music for a few days, but not so much time that it goes unnoticed. 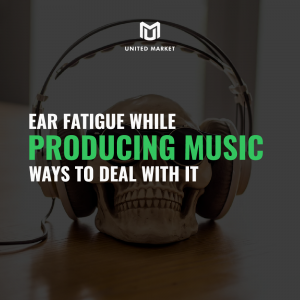 Without any mistakes being recorded, this can be very helpful in making sure that the final product is not only perfect but also marketable.

However, here are 5 ways through which you can also deal with ear fatigue while producing music.

1. Have sessions with your peers or industry professionals: One way you can deal with ear fatigue while producing music is by having sessions with your peers or industry professionals on a consistent basis. Although it will be difficult to produce a full album in a single session, it’s possible that you can manage to produce at least one song in the same amount of time through collaboration.
Make sure that they understand the importance of time. And make sure that everyone involved understands how the track will end. Remember to use a camera to document the process. So that you can improve on your work at a later date.

2. Listen to music in short sessions: Another way through which you can deal with ear fatigue while producing music. Is by listening to your music in short sessions rather than in long sessions. Through this method, it’s possible for you to release tracks regularly without being exhausted after doing so for several days at a time. Although the advice above suggests listening to your music at least twice. You should also take shorter sessions to ensure that you’re not getting tired.

5. Take a break from recording: The fifth way through which you can deal with ear fatigue while producing music is by taking a break from recording. While it’s hard for some people to take breaks during their sessions, it’s important that all parties involved understand. They need time away from each other in order for creative energy to be restored and work resumed.

There are many ways to approach music production but instead of following one. Many people follow a common strategy i.e. press the start button, work. And continue work, and then press the end button. We understand that you are excited about your new project and do not bother about working long hours.
But you should not ignore this serious problem and pay attention equally to your health and job. Don’t forget that the best things are only produced carefully. And creative plans executed in an appropriate manner.

If you follow this path of creating music, you will benefit to a great extent in the long run. Also, if you want to work in the same industry forever. You should not hurt yourself financially and physically by destructing your hearing power with ear fatigue.