Everybody, meet the up and coming Atlanta based music producer Money Makin Myles.

From a young age, Myles knew that he would take the journey of becoming a music producer.

“I started my journey in 10th grade. I took a class called music tech, and it taught me the basics of music production.” 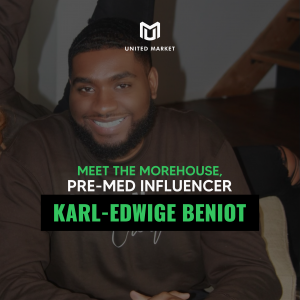 Even though he took his first official music tech class in high school, Money Makin Myles has had an ear for music his entire life. Growing up, listening to, and being influenced by legendary artists and producers have played a significant role.

Since he has a real passion and love for music, he couldn’t name just one favorite artist or producer.

“That’s a loaded question for me. I love music so i have so many favorites , Quincy Jones , The Neptunes, Dj Quik , Dj Toomp, Mannie Fresh, Dr. Dre , Dark Child , Rich Harrison , Kanye West, and Cardo Got Wings to name a few producers. And artist, I’d say Jay Z is my favorite rapper, and Beyoncé is my favorite singer.”

While music alone is a big part of what Money Makin Myles does, he wants to be more than just a producer. He has a company called “Congregation Music Group” where he plans to make money makin moves in 2021.

“The next steps for me is signing artists and more producers to my company, The Congregation Music Group. I want to establish a musical powerhouse in Atlanta in all genres of urban music.”

The Music Group is off to a hot start as they have surpassed 1 MILLION total views on songs produced by Congregation Music Group already. He is influenced by the greats who have transitioned from music to business like Master P and Dr. Dre.

With many icons influencing him early, one of his biggest influences is the city he came from.

“It’s been a true blessing being from Atlanta. The benefits of being from here are countless. The connections I made as a child have come full circle and have allowed me to have several advantages in the city.”

Myles plans to keep going forward and making a name for himself not only in the city but around the world. As he continues to make progress in his career, looking back at the beginning, he has faced obstacles to get to this point.

“The biggest obstacle was creating name value for myself. The game is very trendy; people like what other people like. Getting into the “in crowd” without compromising the morals I stand on as a man was difficult. But I worked hard and perfected my sound and my image the best way I can at this point, though it’s always room for improvement.”

Outside of the music and business aspect, Myles is a spontaneous person that enjoys watching movies and spending time with his friends. He also makes time to see and spend time with his mother and father every chance he gets.

Keep your eyes and ears open for the rising star Money Makin Myles. Please give him a follow on Instagram; it will be linked below!